My husband, who is improving his skills at the Gran Turismo at Playste, tried to run the Cayman GT4 Club Sports at Forza Motorsport 7, and wrote about his impressions and content. Please see if it is good.

A while ago718 Cayman GT4 Club Sport is now available in racing game (simulator) Forza Motorsport 7But recently I was only doing Gran Turismo SPORT, so I couldn't try it out and now it is.

Forza Motorsport 7 is available on Xbox and Windows computers.Racing simulation gameIt is. The game is very attractive because of its beautiful graphics and sounds, and the variety of cars.

There is, and we use properly depending on mood.
In addition, detailed explanation is introduced in the following articles in the past.

Drive Porsche even at home! I bought a PS4 asset corsa.

This time it was released718 Cayman GT4 Club SportsIt is.

this isThe actual car is a racing car and cannot run on public roads.Although it can be purchased in Japan, Porsche Japan sponsors a new series ``Porsche Sprint Challenge Japan (PSCJ)It is said that participation in "is required.

So I decided to get the vehicle and try it at Suzuka Circuit.

First, this is a feature of the game called Forza,Difficulty varies greatly depending on the steering assist level setting.Of course, as with other games, I think this game has a particularly wide swing.

Basically, in my case, I run without any assistance when playing a racing game.simulationThis is the handle setting.

So, if you are playing Forza7, unless you are used to Forza,Steering wheel assist setting is “Normal” modeIt is recommended to set it to prevent the handle from being cut too much. Personally, I think that it is “normal” that is close to the feeling of running on a circuit with a real car.

If you start running with the "Normal" setting, it will be easy to run. The graphics are no less than the Gran Turismo Sport and are very real and beautiful.And the sound is pretty good.

The sound of Gran Turismo SPORT cannot be wiped out, but Forza has also reproduced the sound of `` Kean '' unique to racing cars like 718 Cayman GT4 Club Sports, and it has been reproduced to the extent that it will not be disturbing, ,Exhaust sound and engine sound are highly realisticI think.

The view from the cockpit is real, and if you do it on a large screen, you can feel a lot of realism. By the way, in the case of Forza 7, there is no road-only view that completely hides the car body as in Gran Turismo SPORT,You will always play in a view where you can see part of the car.

I like the view most easily from this cockpit.

A time attack in Suzuka.

Although it is an impression as a simulator to the last, this time I ran while comparing with 981 type Cayman GT4 (not a club sport) for comparison.

Compared to normal GT4, as expectedThe 718 Cayman GT4 Club Sport is easy to run, and it ’s a game, but the lightness of the car body is completely different. The downforce is strong, the brakes work well, and the S-curve is particularly flat and running.In Suzuka's time, it can run around 2'08 "in a fully default setting, but around 2'28" with a normal GT4. I don't know how much it differs from the actual car, but there is still only club sports, and the difference in performance is obvious.

In Forza, you can only choose racing tires and drift tires, and there are almost no tire options. However, the tire width, air pressure, and other settings for the undercarriage can be set relatively freely, so it is a good idea to tune to your liking.

I think Forza 7 is a bit addictive, compared to other simulators. So I don't really use it for practice, but I really like the fact that there are a lot of Porsche models and the new car is released relatively quickly.

718 Cayman GT4 Porsche models that can be used with Forza 7 other than club sports are as follows. It has everything from the latest to the classic cars of the past year. 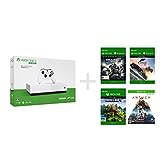 991GT3 Touring Package with almost the same specifications : About the car that Porsche riding husband wants recently
Thank you for your husband's comment. Comment with SUV, ... (3/02)

Taketake : Is the fun of driving Porsche in handling?
Ah, the manicure is beautiful ✨ I have a sloppy butt ... (2/27)