New computer for PC! - Which laptop computer is best for bloggers?

One day, the screen of the Mac gets black

Actually, about a month ago, I used it until now"Mac Book Air"It has broken. My handling of my daily work is sloppy, and the screen is hurt or dropped by the second daughter ... In that state, what I was able to use until now is amazing. At some point, as usual I closed my computer and opened it after a while, the Mac did not say anything and it was a dark screen.

Although charging can be done, no matter what kind of measures it took to turn on the power of the personal computer, if it comes out for repair it will cost 5-60 thousand yen and listening "That is a waste", it ended in the end.

The lifespan of this Mac was two and a half ... short.So, what I will buy next, I have been using Mac for about 10 years, so I think that it is troublesome to make it to a computer other than Mac now.

Nonetheless, since the use of personal computers has changed since when we purchased a computer before, we decided to investigate the PCs of different manufacturers at this opportunity.

Try on the net"Recommended PC for bloggers"I tried searching, but in my case my blog is not going to be main business ... everyone of the bloggers has different situation, so I decided to check it myself.

What is the purpose of using a personal computer?

if you notice,Today I have not bought any Japanese computer makers.(On the contrary until 10 years ago I used domestic products all the time)This is the first thing I noticed when I bought a Mac, but Japanese manufacturers 'PCs often have a lot of software packed with makers' expectations at the time of purchasing a new item.

Software that makes New Year's Cards, Anti-Virus Software, ... Software like "No, I do not need it", I got valuable PC capacity, I do not like it heavy PC.

In addition, Japanese manufacturer's PC seals something on the computer(Such as Intel)I do not like the appearance of being pasted on.(I wonder if the personal computer of the domestic maker now is different, I may have changed since it has not been examined lately)

So, first of all, I thought about the use of my personal computer.

About how much? …I mean"Writing a sentence" is almost.As I consulted my husband,

"I am not working as an engineer or a designer, and if you mainly do writing sentences, I'm not going to donâ € ™ t give it a Mac? If you just make eye catch images, you can not dare to be called a photo shop I can do it. "

It was that. surely. You can make presentation materials that you make occasionally, even if you do not have a keynote ... in that case, it may be good for other manufacturers.

I narrowed it down to 3 types!

So, there were three things that interested me when I looked at various things. First of all,

This is a laptop computer Google has released.Automatically and free updateTherefore,Functions such as antivirus function and voice search are always up-to-date, and the speed never decreases even if you continue to use itThat's it.

No setup required, just log in to your Google account and use it immediatelybe able to.It also starts for several secondsAnd very fast. Also,Equipped with a long-time drive batterySo you do not have to carry a charger when you go out.

I've heard that "ThinkPad's keyboard is easy to get out of there" before, so I have actually tried using it. Certainly, the feeling of smoothly pushing the button, feeling very pleasant, was comfortable to use which I had never tasted before.

If writing is the main thing"Ease of keyboard striking" is a pretty important point. Lenovo is also cheap. There are lots of models that will not cost 100,000 yen, and the official website has always been greatly discounted. Also,Lenovo's new model laptop will be full flatSo, even if it comes by children by chance there is no worry that it will be broken. (Lol) 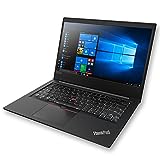 ButSince it is not a designer, absolutely "Pro" is not needed, "MacBook" is compact and stylish, but because the adapter that comes with it is different from "Air", I have to buy everything again.Moreover, it is 50,000 yen higher than "Air".

Which one of the three?

As I consulted my husband again,

"Oh yeah, I think Chromebook is enough with just Chromebook to write, and I do not have any complaints with using Chromebook now, but considering synchronization with iPhone and message (iMessage) is Mac. But Mac may get a new model soon, maybe even wait until then. "

When. I see ... it is certainly convenient to be able to message on a computer.(Such an inconvenience, it is inconvenient because it can not be done with an old Mac that is currently used extraordinarily)

It is convenient to be able to message from the PC now because the second daughter often takes iPhone and can not respond even if mail arrives.

After all, which one did it

So, I worried about various things After all I bought what I bought.(The picture is bad)

MacbookAir (1.8 GHz processor 128 GB storage). I ordinarily posted pictures and the like on the cloud, and since I do not store large amounts of data in my computer, I concluded that 256 GB of storage would not be needed.

However, if you opened it for setting, the second daughter of a sister came out"This is my new personal computer (゚ ∀ ゚)?"Since I was touching or touching with a face like that, I evacuated once.

I plan to set it up again when the children are asleep, and I can not open the screen yet.

That's why I got a lot of trouble and made it "MacbookAir", but the reason is one.

"I want to synchronize with iPhone"

Synchronization, collaboration, preservation ... lol. If I were using another device instead of an iPhone, I do not have to be a Mac, but rather"Chromebook that is light, easy to carry, long lasting charging, cheap price"I think that.

What kind of personal computer do you use? Do you have 2 units to suit your application? If it does not carry, the desktop seems easier to do. To buy a car and buy a personal computer are variously annoying (lol)

Well, as for PC, I will make new blogs and write blogs!

Ishi : Which is easier to drive, Porsche Cayenne or Panamera? The view of the owner who owns both
Thank you for responding to Mina's request ... (3/02)

991GT3 Touring Package with almost the same specifications : About the car that Porsche riding husband wants recently
Thank you for your husband's comment. Comment with SUV, ... (3/02)