One day, to the bonnet

The typhoon yesterday was amazing. Especially the wind was awesome. I was very surprised because it was that there was no recent evacuation recommendation to the area where I live. Since I think that the north from Kanto until tomorrow is serious, I hope the damage will be as little as possible and I hope the typhoon will pass.

Well, the other day. An email arrived from her husband who went to work in the morning.

"The footprints of cats are on the bonnet of Panamera Turbo! Wipe gently with a hammer for Panamera!"

I thought that "Is there such a thing!?" And, as I went to see it, it was really attached, the footprints of cats. And more than ten. I tried trying to get dirty as I told it, but because the hat was dirty with sand and dust, I stained the bonnet on the contrary,I got the result that the crucial cat's footprint could not be removed.

From her husband who came home that day"I'd like to wipe the car's dirt with an absolutely dry cloth.First of all, after floating the dirt with a cloth moistened. "I was admonished. I'm sorry ... I'm really sorry ....

Fortunately, just because the coating was damaged, my husband wiped during the day, the wound disappeared and it became beautiful. Was good….

And, her husband who rarely expresses emotion, was excited with a lot of anger revealed. Sora, it looks like you bought it with a new car, it was only ten days or so, a cat was hung with a nail with a nail, and it was supposed to have been scratched to a cracker, it did not get riddled.

So, the husband examined it on the net and bought a cat repelling goods at once. That's it. 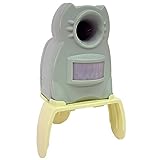 Things to make 10000 yen, Amazon was about 5000 yen or less. Moreover, there are nearly 2000 reviews written. However, since it arrived at home, rain continues and a typhoon hurts so it can not be installed easily, and it seems that it will finally be installed soon. With this, "How long will not cat catch up" I think I'll try to write it in the article a bit later.

Taketake : Is the fun of driving Porsche in handling?
Ah, the manicure is beautiful ✨ I have a sloppy butt ... (2/27)

Fuga : Buying a Porsche means stepping on the accelerator of life
> But when I saw the ATM at the convenience store next door, no one was lined up. Trouble ... (2/27)